The Old Village of Alonnisos 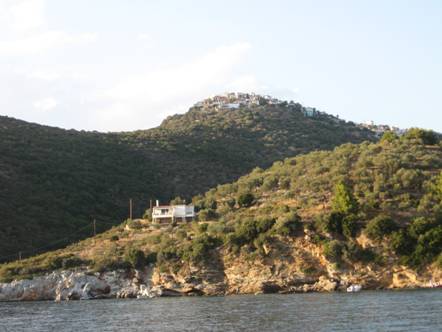 As your hydrofoil boat or ferry approaches the island, you’ll see the Old Village of Alonnisos perched atop one of the mountain peaks, and it is quite a site to behold. This village dates back to the Byzantine period in history and was the original capital of the island before the houses were destroyed by the disastrous earthquake of 1965. That seismic event devastated the island, and particularly the Old Village. The local folks living up there were then forced by the ruling Junta to move down to the port town of Patitiri where rather basic housing was built to accommodate them. That left the Old Village essentially uninhabited. It remained that way for perhaps 10 years or more until primarily foreigners began buying up the “ruins” of the buildings. Over time restored houses began to take shape and the Old Village became lively once again. Electricity ultimately found its way to the village and that created an even greater opportunity for it to expand as a tourist destination. 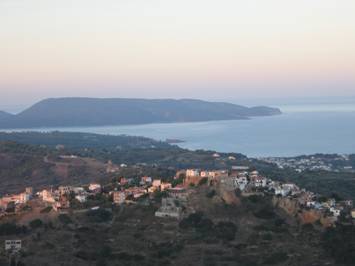 Today the Old Village is probably the most popular place on the island, and this is especially true during the high season for tourism, when on any given night the sounds of music, plate clanging, and socializing can be heard throughout the areas surrounding it. When we visit Alonnisos we stay in an area that is often referred to as the “lower village,” a series of homes further down the mountainside. Though admittedly not quite as quaint, it’s a lot quieter and the houses are not so packed together. It’s just a short (though somewhat steep) walk up to the plateia (town square) of the village. There are numerous homes available for rental in this area of the village; to learn about three properties that I’ve written about here on this blog, click here.

There is also fine art available in the Old Village, as Bente Keller, a Danish painter, operates an art gallery called Gallery 5″ that features her beautiful watercolor artwork. Note that she likewise sells a wonderful book called the Alonnisos Guide that is packed with valuable information about the island. In addition, she has available a very handy book called Alonnisos on Foot, which is a detailed guide to swimming and walking on the island. If you’ve never been to island, these two books will be of great value to you in planning your stay, and great reference for the times when you return (and I predict you will!). 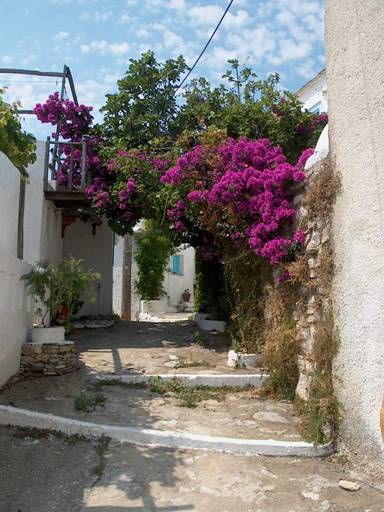 During the day the Old Village offers a wide range of eye-catching views as you wander through its labyrinth of walkways.

At night is when the Old Village really comes to life, as it’s just an amazing place to walk

around and people watch. We always get a kick out of seeing the style-conscious young women with stiletto heels trying to navigate their way up one of the cobblestone paths in the village. It is very unusual for them to make it the full length of the path without almost tripping once or twice along the way. Ah, the things we do when we’re young!

During the height of the season, there are always numerous people enjoying their drinks and dinner at a number of establishments that line the walkways of the village, plus a lot of people just walking around and soaking up the lively atmosphere of the place.

This entry was posted in Alonnisos - Old Village. Bookmark the permalink.