tion about Alonnisos, today I feel compelled to post news about the recent passing of a wonderful man named Kurt von Schirnding (pictured to your right) who, along with his wife Gisela, owned a waterfront home on Alonnisos for over 40 years. Kurt and Gisela were actually among the first group of foreigners to purchase property on Alonnisos back in the 1960s.

Construction of their small, but comfortable home required all of the materials to arrive by boat and then be carried by donkey to the building site, as roads had not yet been developed in that area of the island. They loved Alonnisos very much, and, along with their four children, visited it often over the years for their summer holidays. Once Kurt retired, he and Gisela would typically spend two – three months on the island, and could often be spotted in Steni Vala, and in Patitiri as well. 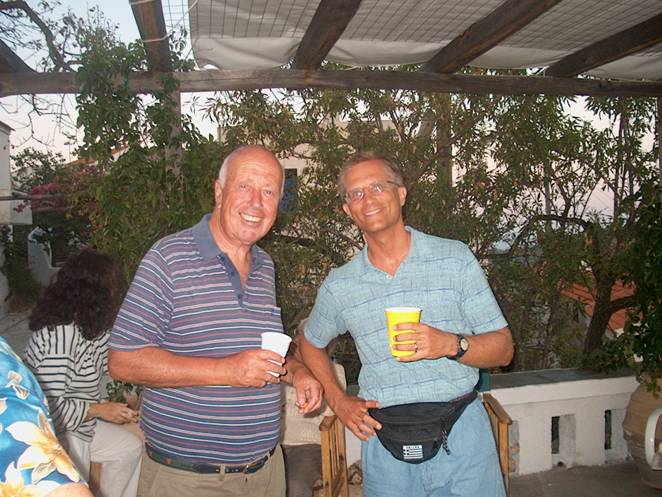 My wife Andrea and I had the great pleasure of meeting them during our four-month trip to Alonnisos in 2000, as my in-laws were kind enough to introduce them to us. That summer we spent a lot of time with them, and I got to know Kurt very well (see photo of us in 2006 to your left). Interestingly, I learned that he was a career diplomat for South Africa, and for a period of time served as that country’s Ambassador to the United Nations.

What I found most impressive about this man, is that despite his many years of serving in the public limelight as a highly esteemed diplomat, he always treated everyone he met in a very special and caring way, and never once boasted of his past achievements or position. He was also incredibly kind, generous, and very fun-loving. We feel privileged to have known Kurt, and will always remember him and the many enjoyable times we spent with he and Gisela. Anyone associated with Alonnisos who knew Kurt would surely agree that the island has lost a great friend. He will be sorely missed by those were blessed to have known him.

This entry was posted in Alonnisos - General. Bookmark the permalink.