Kastro Restaurant in the Old Village

One of our favorite restaurants (“Estiatorio” in Greek) in the Old Village of Alonnisos is called “Kastro,” which in English means “The Castle.” It is centrally located along a major walkway in the village, and during the summer is one of the busiest restaurants in the Old Village, if not on the entire island. We eat dinners there on a regular basis, and occasionally have gotten big groups together for parties. The picture to the right is one taken during a dinner over a decade ago to celebrate my birthday. 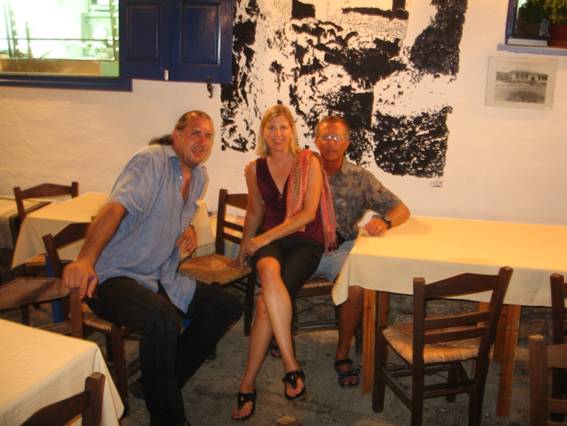 In my view there are three primary reasons for Kastro’s continued success over the years. First and foremost, the food is of great quality (more about that in a moment), second, the atmosphere is vibrant, and third, the owner, Nectarios (pictured on the left with Andrea and me) is a professional restaurateur who is dedicated to making sure his customers are completely satisfied with their dining experience. Part of this is a commitment to making certain that food orders are filled as promptly as possible – to assist in meeting this objective, back in 2007 he became the first restaurant owner on the island to install a state-of-the art wireless ordering system that allows the kitchen to start preparing orders while Nectarios is entering them right at the table via a touch-screen order entry pad.

Andrea and I originally met Nectarios back in 2002, and since that time have come to consider him as a very dear friend. Unlike some other restaurant owners in Greece we’ve met who we feel “feign” friendliness, it’s obvious that Nectarios really does like foreign visitors to the island, and is very grateful when they choose to eat at his restaurant. He truly embodies the spirit of the Greek term “filoxenia” (friendship and hospitality to foreigners). The picture to your right was taken during the summer of 2010, and in addition to Nectarios includes my in-laws Elaine & Peter Cunningham. It was late in the season, so we had a rare opportunity to have a long and enjoyable conversation with our good friend.

The dish that  Kastro is most known for is Nectarios’ renowned “roast pork on a spit” called Kontosoufli. Other available foods include grilled chicken, lamb chops, swordfish, calamari, a host of tasty hot and cold appetizers, and a full range of fresh salads as well. In addition, one of Nectarios’ most popular appetizers is flaming Saganaki cheese. Click on this link to see a brief YouTube video of him preparing and delivering that dish to a customer. While other restaurants offer similar types of food, from our experience there is certainly no better grilled food in Alonnisos. Nectarios also has a nice selection of bottled wines, plus the usual beers typically found in restaurants in Greece (i.e., Amstel, Heineken, and Mythos). I can honestly say we’ve never had a bad meal at  Kastro, and in the rare instances where something we ordered wasn’t exactly what we wanted, Nectarios made sure that we were fully satisfied in the end.

As I indicated earlier, the ambiance of the place is very lively, and particularly so during the high tourist season. On the very busy nights there is a constant parade of people strolling through the village checking out the sites and looking for a spot to eat. There’s probably no better place for people watching at that time of night in Alonnisos. Because of the popularity of Kastro, there are times when one has to wait for a while to get a table, and if you happen to experience this rest assured that in our experience the meal will be well worth the wait. One way to make sure you’ll get seated is to arrive prior to the big evening rush, which usually begins after about 8:30 p.m.

One other thing, sometimes later in the tourist season (late August/early September) when business slows down quite a bit, Nectarios will occasionally pick up his bouzouki (which he’s played since he was a boy) and play traditional Greek songs. I had never heard him play over the many years I’d known him, but finally got the chance in 2009 when I saw entertain along with his friends Vangelis and Yiannis accompanying him. He is tremendously talented, and his friends are very gifted musicians as well. To see a YouTube video showing parts of the impromptu concert I heard that night, click here.

Finally, when you do visit Kastro please feel free to greet Nectarios by name (i.e., Nectario [drop the “s”]), and tell him Jeff & Andrea sent you!

This entry was posted in Alonnisos - Restaurants. Bookmark the permalink.